A guide to help locate soil surveys in Renne Library and online.

Where can I find soil surveys?

2007-present: The most recent soil surveys are available online from the USDA.

Where can I find additional soil surveys?
The USDA has many current soil surveys available online.  For these and other resources, check out the other tabs in the Guide.

This soil has been designated as Montana's state soil by the National Resources Conservation Service (part of the U.S. Department of Agriculture). A state soil is a soil that has special significance to a particular state. Each state in the United States has selected a state soil, twenty of which have been legislatively established. These “Official State Soils” share the same level of distinction as official state flowers and birds. Montana is one of about 30 states without an official (legislatively established) state soil, but soil scientists and Bozeman fourth graders are currently spearheading an effort to have the powers-that-be in Helena designate the Scobey as an official state soil during this upcoming legislative session.

The Scobey series consists of very deep, well drained soils on till plains, hills, and moraines in the north-central part of Montana.  These soils occur on more than 700,000 acres.  They are among the most productive soils in Montana's Golden Triangle, an area known for its ideal climatic conditions for growing wheat of exceptionally high quality.  The three points of the Golden Triangle are Havre, Conrad, and Great Falls.  The main crops grown on Scobey soils are spring and winter varieties of nonirrigated wheat.

These soils are named for the town of Scobey, in northeast Montana.  The series was established in 1928.

To learn more about state soils go to the atural Resources Conservation Service. 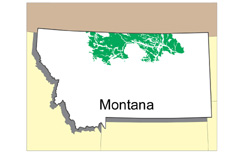